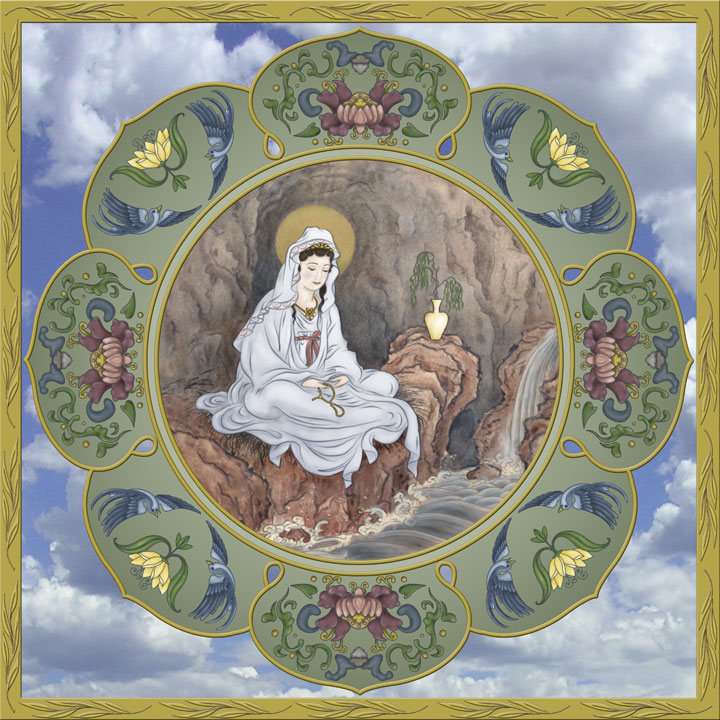 It was inevitable that one day I should come to "painting with light" on a computer screen with a graphics tablet and stylus rather than creating my mandalas on flat canvas with brush and liquid acrylic paint. The mandalas of Tibetan Tantric Buddhism are two dimensional but represent a three-dimensional universe, or protected realm, where individuals can mentally practice meditation and the path to enlightenment without distraction. I learned mandala painting by copying the exquisite and finely detailed thangkas and mandalas of this tradition in my own artistic style. In my mind's eye, the mandala has always been a portal to other dimensions to discover healing and uplifting symbolism to share through my artwork. The pathway to digital artist has not been easy, but my creative soul dances with joy. I have found a way to bring added depth, meaning and beauty to my spiritual art.

The Symbolism of the Mandala

Although not a Tantric goddess as are the Taras, Quan Yin (Kuan Yin), Goddess of Compassion and Healing, is one of the most popular and revered deities in all of Asia. Her name roughly translates as "The One Who Hears the Cries of the World." Her mantra is "Om Mani Padme Hum." Many believe she is the female representation of Avalokitesvara, the thousand-armed Tibetan God of Compassion. Just as Catholic Christianity has provided the faithful with an antidote to theological patriarchy in the Virgin Mary, so Buddhism has evolved a feminine bodhisattva named Quan Yin. In the Tantric sense, inherent forces continually strive to balance and harmonize the powerful polarities of masculine and feminine. She is often depicted in flowing robes of white for purity and holding a willow branch in one hand and in the other a vase pouring out her compassion on the world.

The inspiration for "Celestial Blessings" is from an illustration in one of my favorite childhood storybooks. The goddess appears as the young Miao Shan who, according to legend, meditated alone in a grotto for many years to attain perfection before becoming known as Quan Yin. The petals of her lotus palace are embellished with motifs from antique Chinese porcelain symbolizing good fortune and a happy marriage as well as the immortal lovebirds from the beloved Blue Willow dinnerware originating in England over 200 years ago. Her "cloud throne" was fashioned by Mother Nature. The willow branch or wand, a symbol of wisdom and healing the earth and its people, has been used in rituals and storytelling in a variety of cultures throughout the world since the beginning of time.

[return to top of page]